"Conquering The Drawbacks Of Democracy" 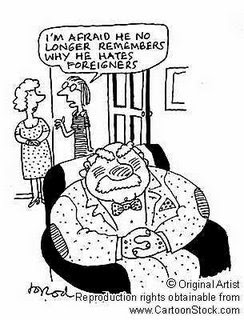 My friend Marc Lord at Adored by Hordes, has written a stunning piece directly addressing the wingnuttery of Philip Atkinson. Atkinson is the crazy responsible for the the article published and subsequently pulled, from the website Family Security Matters (see below post).

An example of Atkinson's 'work':"The wisest course would have been for President Bush to use his nuclear weapons to slaughter Iraqis until they complied with his demands, or until they were all dead.”

Marc has written a response to this madness, directly to Atkinson, and in the best snark possible:

No, Mr. Atkinson, the central problem with your proposal is not that it goes too far. Simply that it does not go far enough. I strongly suggest you lend your support to our Nuclear Die-Off Proposal (NDOP). Your talents of persuasion would be most welcomed, and I think you'll find an inviting and stimulating home for a classically minded intellect. Won't you join us?

Read Adored by Hordes and if so inclined, send your own response to this nutbag.
Posted by HopeSpringsATurtle at 9:25 PM

The logic is impeccable.

Yes, so logical - and so in keeping with the teachings of Jesus. No wait, he took the diametrically opposite approach.