The Wickedness of the GOP

Again the Grand OLD Partisan republicans are setting it up to steal the election. Poll numbers are all over the place. McCain internal polls are saying the race is "essentially tied." Election fraud and voter suppression stories are popping up even on in the corporate media despite the right-wing drivel about "voter fraud " and ACORN. All a set-up for the fourth election in a row to be stolen by the immoral GOP. My only hope lie in the extraordinary registration and turn-out of new (and old) Democrats and if the darkside seems to pull it off, on November the Fifth, the American people will pull a "V for Vendetta" of some kind. Is this really America? Have we all been asleep this long?
Posted by HopeSpringsATurtle at 7:43 PM 8 comments:

"Climbing up the brick to your window using the sharp end of what you said...yeah yeah"
Posted by HopeSpringsATurtle at 11:41 PM 8 comments:

The Inconvenience of Posse Comitatus 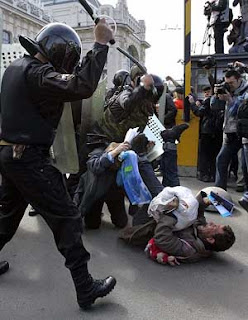 Enacted after Civil War Reconstruction in 1878, Posse Comitatus (U.S.C. 18-13850) has always been a double-edged sword. The compromise of the North with the South which withdrew Federal troops from former Confederate states and allowed racism and the general disenfranchisement of former slaves to flourish, was also intended to end the federal military from taking part in police actions. Yet once again, the Bush administration stretches law to it breaking point, while pushing our over-burdened military ever closer to the precipice.

News out today from the US Northern Command that the Army's 3rd Infantry Division’s 1st Brigade Combat Team will be the nation's 'new police'. The 3rd ID is the most rotated combat component in Iraq and now they're home to do the same duty as part of the newest permanent part of the Army -- CBRNE Consequence Management Response Force.

Now they’re training for the same mission — with a twist — at home.

Beginning Oct. 1 for 12 months, the 1st BCT will be under the day-to-day control of U.S. Army North, the Army service component of Northern Command, as an on-call federal response force for natural or manmade emergencies and disasters, including terrorist attacks.

What is played down in the articles out of NORCOM, Ft. Stewart and the Dept. of Homeland Security is the element of CCMRF (sea-smurf) being implemented to 'deal with' protesters and civil disturbances.

Posse Comitatus became law for a number of reasons but first and foremost was so American servicepersons would not be put in the position of turning weapons on the American public. It seems we creep ever-closer to martial law as the reins of power slip from the GOP's fascist grip. As the divides in American ideology deepen, the political landscape of the presidential race features McCain mobs yelling, "kill him...terrorist" and worse, while my beloved military is put in the untenable position of having to defend not the Constitution, but the ideologic policies of a rogue government.

This election can not end soon enough for me.
Posted by HopeSpringsATurtle at 7:21 AM 7 comments:

Really. This is what they do with bailout money. Welcome to the dark side America. Story at Think Progress with a sidebar from Fucked in California blog.
Posted by HopeSpringsATurtle at 9:31 PM 7 comments:

At a McCain 'rally' yesterday during the inflammatory speech grandpa made, in response to what he says you can hear from the crowd what sounds like either, "terrorist," or "kill him." I listened several times and can't be sure which it is, but regardless, McCain heard it as you can tell from his immediate reaction, and yet does or says nothing. Is that leadership? Come on. Really. Ask yourself, is it? Certainly McCain is not responsible for what others say or do but if he knows of it he has the responsibility to say something. Think about it. This is not the way to act "presidential."


Note to regular readers:I have recently joined some milblogs as a reader commenter and am posting regularly a some military message boards. I find myself currently on a mission to change minds and am writing not with the choir in mind.
Posted by HopeSpringsATurtle at 2:12 PM 6 comments:

Lifted from the comments at the Unruly Mob's place, Les Enragés.org


I would also like to point out a new button on the sidebar. A link to Dogtown, at Best Friends Sanctuary, the largest animal sanctuary in the states. Click it an give them a look-see and a donation if you can.
Posted by HopeSpringsATurtle at 11:46 PM 5 comments:

Winky McWinkerson Goes to the Debate

And doggoneit she did just swell. Yikes, nightmare on Wasilla 's Main Street. Yes, but funny.

Posted by HopeSpringsATurtle at 11:23 PM No comments:

"If I were a dictator, which I always aspire to be..."

Direct quote from John McCain's meeting yesterday with the editorial board of The Des Moines Register. Finally a little truth creeps onto the "Straight Talk Express." Watch the entire interview or short segments on specific topics, but do listen to Gramppy utter the same famous words as Junior. The clip is: Full Editorial Board, dictator statement begins at 56:50. I would like to point out, as John McCain so often does, that he had long military career. The military is not a democracy. No wonder he wants to be a dictator.
Posted by HopeSpringsATurtle at 8:58 AM 3 comments:

Labels: AYFKM?, bat-shit crazy, If I were a dictator, McAncient, McCain, McCreepy, You kids get off my lawn

"Is this the United States Congress or the board of directors of Goldman Sachs?"

Dennis Kucinich's one minute speech has more substance in it than all the talking heads and msm reports over the last weeks. I really love Dennis.

Posted by HopeSpringsATurtle at 11:49 AM 3 comments: