So yet again another absence from the blog which has kinda morphed into facebook--but I digress. The "Occupy" movement is getting much press and there may be some long term effects to come from it but I was sad to see tonight the violence erupting now globally, from protest movements worldwide. Tonight, Philadelphia and Los Angeles have the feeling of a 'police state' with militarized police forces more than willing to get violent with people exercising their first amendment rights. What caught my interest most was a blog post I read in response to the now infamous, "Occupy Bagram" photo which shows a small group of armed soldiers giving their estimation of the OWS crowd. 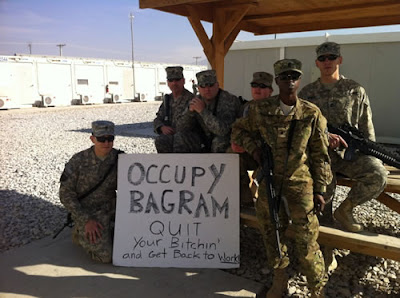 What got my attention initially was a doctored "Occupy Bagram" pic: 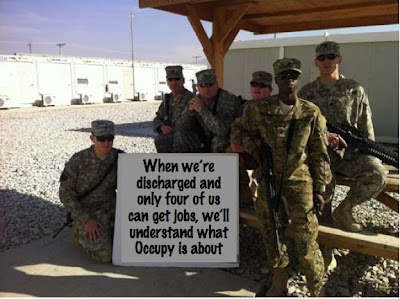 The above photo ultimately landed me at a USAF pilot's blog, "Pick Your Battles" and his response to the original. The comments to his post are worth reading. As some of you who read here know, my gal-pal is deployed in the 'Stan now and frankly, I wish the soldiers in the pic were less concerned about the politics back home and more engaged with supporting their mission. Really what I want is for US forces to be out of Afghanistan and Iraq. Okay, really, I'm studying now.
Posted by HopeSpringsATurtle at 2:32 AM No comments:

How To Kiss A Girl

I posted this sometime ago but it disappeared into the intertubes-ether. I found it again, albeit with different music which I think doesn't work at all (the music supervisor/DJ in me talking). So, I'm including a link to the song I think should be playing and encourage you to mute the song in the video and play this (open in another window, press 'play', let 12 seconds of song play, start kissing video after 12 seconds have elapsed on 'Maybe Tomorrow,' reduce its window and watch girls). Sorry it's such a high maintenance post after so long away. I'm in school and facebook is my only social outlet currently. If you read here and want to be on my fb, email me.

Posted by HopeSpringsATurtle at 6:49 PM 2 comments:

Protect the Children (and mean it)

Posted by HopeSpringsATurtle at 2:53 PM 3 comments:

A Quick Breakdown on Today's Injunction on DADT Discharges

So now the injunction has brought us into a 'check' position in this neverending DADT chess game. Whether the DoJ appeals or not, the expected changing face of the next congress should throw a new wrench into the mix. In the parlance of the US Navy, "Brace for heavy rolls as the ship comes about".

From Jarrod Chlapowski:
Well, maybe not so quick. As of right now, "Don't Ask, Don't Tell" is not in effect. Tomorrow, next week, is another story. Maybe.

Today, Judge Virgina Phillips who is presiding over the case LCR v. USA in Riverside declared DADT unconstitutional on free speech and due process grounds, ordering both an end to implementation of DADT and a suspension of all currently pending DADT discharge cases.

What can prevent ruling from remaining in effect is if the 9th Circuit (within which the Riverside court resides) places a stay on discharges at the request of the Department of Justice, who has 60 days to do so. As it would be a disaster for the military to have DADT lifted for more than a few weeks before having a stay on the injunction (ie, discharges allowed to resume), if there were to be an appeal, you can expect it to occur very quickly, augmented by the context of election season.

The ruling comes at a moment when things are in a jumble in the DADT repeal movement. The September dilemma over procedural tactics prevented a decisive vote on DADT, effectively framing the debate as partisan and adding an extra dose of cynicism from our allies, and severely handicapping the fight for repeal through the midterm election cycle. A December lame-duck vote is looking less and less likely as attention is diverted from the issue and larger orgs abstain from pressuring the decision-makers and influencers on legislative scheduling for the sake of maintaining access. And, worst case scenario, should we fail this year, legislative repeal next year looks extremely unlikely at best, which will at least partly be fueled by the partisan mess that resulted from September's snafu. The best way out of this mess for all-involved would be if DOJ opted not to push for a stay on the injunction.

Now the White House has its own dilemma to deal with, facing (very generally) four options on DADT repeal:

1). Push for DOJ not to appeal the ruling, and effectively ending DADT;
2). Become very active in pushing for a lame-duck legislative repeal;
3). Halt discharges via executive order while the court case goes through the appeals process;
4). Don't do anything, and walk into the 2012 elections with DADT still on the books.

Any one of the four will cost political capital to varying degrees. Option 1 arguably expends the least capital, though at the least optimal time before election season. Option 2 is possible and spends a little more capital, though it would require a certain dedication above other legislative priorities in the very short lame-duck where even a positive outcome is not guaranteed. Option 3 is not even in the realm of consideration until we know the Congressional makeup next year, so counting on it is a gamble (though timing in the beginning of 2011 right after the review comes out in December and before 2012 election season really takes off might be ideal). Option 4 is a distinct possibility, though also a gamble when 82% of the population already is in favor of repeal.

What does this mean for us? Two things.

A). It is very likely this will be appealed, and very likely this appeal will be in the next few days. Though there is hope the White House will wise-up and realize what it's stepping into should DOJ aggressively push to appeal the injunction.

B). Instead of celebrating, we should be preparing for future action pressuring the White House. If a stay is placed on the injunction, we have our work cut out for us over the next few months, if not years. And the White House right now is the biggest player in how the fight to repeal DADT goes down in 2010.

Stay tuned.
Posted by HopeSpringsATurtle at 9:27 PM No comments:

How To Kiss a Girl

My blog is the only place I can post-while-drunk, so here goes:

Posted by HopeSpringsATurtle at 11:09 PM 3 comments: