Godspeed Senator Kennedy, You will be missed. 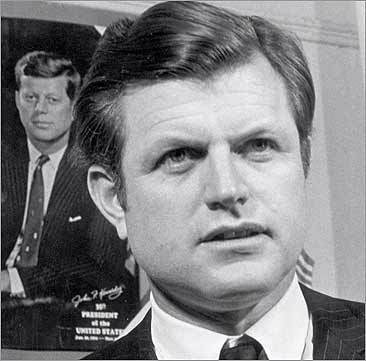 I sit here in Massachusetts, a mere 40 minute drive from where Teddy today died in Hyannis Port. I awoke to the news early this Cape Cod morning and started to cry. While not a perfect person, he was an amazing Senator and stalwart supporter of us here on the left and ALL Americans who have ever been in need.

I've always felt a peculiar affinity to all the Kennedy's, but to Teddy in particular. His birthday is two days before mine, I've always felt we shared a similar outlook and spirit. Not to mention, me growing up Catholic and at least a quarter Irish. Okay, maybe part of it is the Pisces thing, but in fact, his passion in politics and his often bellicose, but always compassionate response to those less fortunate, his ever-present cheer leading for change and willingness to let others take the lions share of the credit for valuable legislation, will not soon , if ever be replaced in the US Senate.

I can't say enough about the personal and political loss of Edward Moore Kennedy and what repercussions of his death will have on what he considered his life's work-- health care. Another thing Teddy and I have in common is we have both always had health care. His provided by being from a family of means, and later provided by the government, and mine, always provided by the US Military in a single-payer system that has most recently provided me with a new titanium knee. I pray his legacy is the passing of the President's health care bill that will become a living tribute to a legacy he would be proud to to take credit for.

Tomorrow, I will visit and leave flowers at the gate of the Kennedy compound where we lost maybe the last, best, hope for an America we all have really hoped for all along. I hoist a shot of good Irish whiskey as I wish us all peace in our sorrow and condolences to his family and all Americans who lost the Lion of the Senate today. Godspeed Teddy, though I know you're already there.
Posted by HopeSpringsATurtle at 3:07 PM 5 comments: