I will be away for a few days. Thank you for your patience and patronage.
Posted by HopeSpringsATurtle at 1:15 AM 9 comments:

Someone Remembers the Troops

A quote from the article at Army Times describing a troop "mutiny" in Iraq. After a staggering number of losses in the same company, soldiers speak out and refuse to return to 'Old Mod.'

“You never really get over the anger,” said Staff Sgt. Robin Johnson, a member of Charlie’s scout platoon who had been especially close to Agami. “It just kind of becomes everything you are. You become pissed off at everything. We wanted to destroy everything in our paths, but they wanted us to keep building sewer systems and handing out teddy bears.”

Read Greg Mitchell's piece and the complete Army Times article here.
Posted by HopeSpringsATurtle at 4:37 AM No comments:

Keith Olbermann is interviewed by veteran journalist Bill Moyers on his PBS program Journal. Keith and Bill discuss the state of the nation and issue another wake up call to Americans in this pivotal point in our country's history to rouse themselves from this state of suspension of disbelief about what is being perpetrated on the American landscape by the Bush administration. Watch it here.
Posted by HopeSpringsATurtle at 9:18 AM 2 comments:

One of Ours takes on Mitch McChinless!

Jon Soltz of Vote Vets tells all in his KOS diary.

As an Iraq war veteran, today is pretty exciting for me, and all the other vets I talk with. Today, one of our own took the first step towards knocking off Senator Mitch McConnell in 2008. Iraq War Veteran Andrew Horne jumped into the race.

H/T to Mary for the heads up. As an aside, could Sen. Turtle (no relation, I assure you) have found a less flattering photo? Mitch is not a good-looking man is all I'm sayin'...
Posted by HopeSpringsATurtle at 11:33 AM 2 comments:

The Way of the Buffalo

The general business of winterizing the homestead and the bustle of the holiday season have kept me away from the keyboard. I thank everyone for their patience. All told though, I'm disturbed how buried the N.I.E. and the ensuing cover-up brought about by the CIA torture tapes being destroyed has become. It is all too clear the chimp-in-charge lied--again and he with his republibots, continues still, to gin-up war with Iran as America sleeps. Torture has become de rigueur to the "average" American, the U.S. Constitution is passe, and the most pressing issue seems what the George Mitchell report will say about steroid use in baseball.

In listening to various podcasts this week, Scott Ritter at TruthOut warns of what he believes is a still imminent threat of the emperor-king letting loose on Iran and the endemically incurious American regarding the dangerous threat such an attack would encompass. Meanwhile, the MSM chirps how the war crimes this administration has conducted under the "unitary executive" meme is much ado about nothing.

In another podcast, The National Constitution Center asks the question, Is the Constitution Outdated?. Answering this query are Larry Sabato, Michael Oreskes, and Eric Lane with the start point of agreeing on the erosion of constututional literacy in America. They could have referenced Miss Teen South Carolina as an example of such civic and cultural illiteracy, particularly in America's youth.

These days I'm left wondering how far America will have to fall before we the people do something and stop the criminals from taking over forever. Or at least until we go the way of the buffalo.
Posted by HopeSpringsATurtle at 5:43 AM 6 comments:

Labels: asleep at the wheel, Bush is a liar and a sociopath, CIA, torture

"There are few choices more terrifying than the one Mr.. Bush has left us with tonight.

We have either a president who is too dishonest to restrain himself from invoking World War Three about Iran at least six weeks after he had to have known that the analogy would be fantastic, irresponsible hyperbole -- or we have a president too transcendently stupid not to have asked -- at what now appears to have been a series of opportunities to do so -- whether the fairy tales he either created or was fed, were still even remotely plausible.

A pathological presidential liar, or an idiot-in-chief. It is the nightmare scenario of political science fiction: A critical juncture in our history and, contained in either answer, a president manifestly unfit to serve, and behind him in the vice presidency: an unapologetic war-monger who has long been seeing a world visible only to himself.

After Ms Perino's announcement from the White House late last night, the timeline is inescapable and clear.

In August the President was told by his hand-picked Major Domo of intelligence Mike McConnell, a flinty, high-strung-looking, worrying-warrior who will always see more clouds than silver linings, that what "everybody thought" about Iran might be, in essence, crap. ..." - Keith Olbermann
Posted by HopeSpringsATurtle at 8:48 PM 6 comments:

Labels: Bush is a liar and a sociopath, Iran, Olbermann, special comment 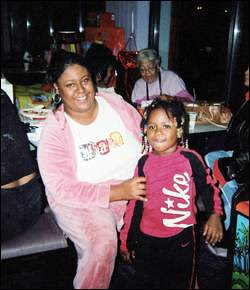 DETROIT -- A 7-year-old-girl is being hailed as an "angel from heaven" and a hero for jumping in front of an enraged gunman, who pumped six bullets into the child as she used her body as a shield to save her mother's life.

Alexis Goggins, a first-grader at Campbell Elementary School, is in stable condition at Children's Hospital in Detroit recovering from gunshot wounds to the eye, left temple, chin, cheek, chest and right arm.

"She is an angel from heaven," said Aisha Ford, a family friend for 15 years who also was caught up in the evening of terror.

A fund has been set up to help with Alexis medical costs and recovery. Send this brave little girl some Christmas Holiday cheer, I did and I'm sure she'll appreciate it.
Posted by HopeSpringsATurtle at 8:34 PM 2 comments:

By no other than the Bush administration--big surprise. A Soldier's Officer.

In a nondescript conference room at Walter Reed Army Medical Center, 1st Lt. Elizabeth Whiteside listened last week as an Army prosecutor outlined the criminal case against her in a preliminary hearing. The charges: attempting suicide and endangering the life of another soldier while serving in Iraq.

H/T to Op for the link.
Posted by HopeSpringsATurtle at 4:40 PM 6 comments:

Posted by HopeSpringsATurtle at 3:26 PM 2 comments: