The Ides of March

The Ides of March has a foreboding nature that history still, 2000 years later, cautions us to "beware." This is the advice I would give to Dubya, for it maybe he has a budding Brutus in his midst. There is a commonly known idea about the Bush administration and it demands of 'loyalty'. There are many reports of the "ideological test" Bush appointees has to take in order to move up the food chain. But apparently, the loyalty is one-sided at BushCo. Donald Rumsfeld, Scooter Libby, Harriett Miers, have all been put out to pasture in less-than-ceremonious ways, and it would appear, Alberto Gonzales will be next to be thrown under the bus to save the president's hide. 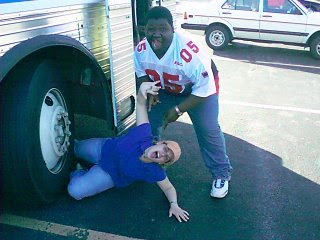 WaPo's Andrew Cohen writes the third part of his series on the not-so-illustrious career of Abu Gonzalez, and his dubious history as an attorney. Gonzo has shown he can be a heartless scum bucket with the best of them but so far hasn't really shown a willingness to "take one for the team."

Gonzales has the goods on the president and the vice-fucktard as well. With his professional history of addle-brained legal decisions, morally-compromised positions and politicized partisan choices, he has made his loyalty to Junior apparent. But also displayed in this legal complicity are the acts of a self-interested climber that when push comes to shove, I'm laying my money on Gonzo to start singing like a bird about the goings-on in the White House when it's his skin at stake. I think Gonzo is to end up on the Bush scrapheap, but I don't think he's gonna take it laying down. Eu tu Brute, indeed Mr. President.

Paul Kiel at TPM Muckracker goes into "Why We Need A Special Prosecutor for the USA Firings" Love to see how Abu will react to this.

Also worth digging into today, the Glenn Greenwald post on the "Right-wing al-Qaida Plots" bursting out all over the right blogosphere in reaction to Khalid Sheikh Mohammed's "confession" to everything but the Kennedy assassination.
Posted by HopeSpringsATurtle at 8:34 AM

No way. Never happen. Gonzales is Bush's creature, and he will not betray him unless he's looking at prison - and that would only be a factor if Dubya denies him a pardon (which is equally improbable, IMHO).

Even setting loyalty aside, if he rats out Dubya, his career is OVER.

Sadly, Eli's probably right. Except, what if Abu is facing jail from a special prosecutor, and Bush runs out of term? Then the prosecutor could flip Abu to go after Bush, if no pardon was on the table.

"he will not betray him unless he's looking at prison...
My point exactly. If Gonzo rats out Junior, all bets are off for pardons and the like. I'll bet Abu doesn't actually like Chimpy, and would enjoy tossing him under the mass trasportation vehicle. If the screws get tight enough, I bet he'll make a deal for immunity and plead "intimidation." Don'r forget, Ga-ga is a real estate attorney, he's got apretty idea when it's time to sell.

PS..his career is over anyway. He's been unmasked as a hack, another shill-croney of the good ole boys down in Tejas.