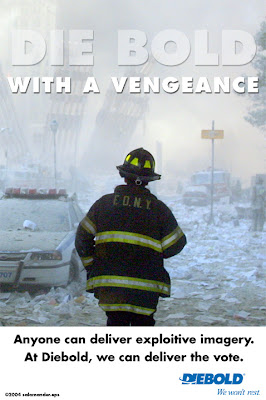 Mississippi's Republican Secretary of State, Eric Clark has certified Diebold touch screen voting machines for the next election. Can someone explain to me how past CA Sec. of State Kevin Shelly and current California Secretary of State Debra Bowen decertified the same machines because they can easily be tampered with to change the outcome of an election, while Mr. Clark says they are A-OK?

'Public Service' announcements running on local tv and radio stations tout how reliable and easy to use Diebold's machines are. I haven't heard word one about all the problems with flipping votes and the many states that have decertified the touch-screen voting. If you have any doubts, check on the Diebold machines yourself. Many articles, tests and expert testimony exists.

Fucking criminals. But then who gives a shit? It's just Mississippi, right? The reddest of red states, the dumbest, the most fat. What possible difference could it make to give your opinion, vent your outrage. Remember, they want us disenfranchised, impotent, weak, afraid. Prove them wrong.Call or email Eric Clark and raise hell about the blatant attempt by the GOP to steal another election.
Posted by HopeSpringsATurtle at 12:51 PM

Testing...testing...is this thing on? I predicted no one would comment on this post because no one cares about Mississippi.