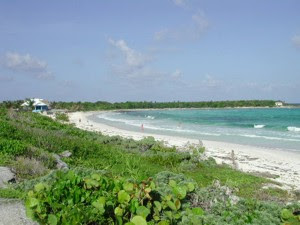 We returned last night from a week in Cozumel. We had a great time. Several adventures complete with an interesting cast of characters. We met several retired military couples, some progressive west-coasters and a couple of Blackwater USA guys. Who knew?

Our Blackwater fellow resort patrons are from Texas, which should surprise no one. They are young (23), from conservative homes, and based on my impressions, see Blackwater as their 'shot' (no pun intended) at the 'American Dream.'

High wages. Adventure. Patriotism. These are the benefits as viewed by these very nice young men who find going to Afghanistan and Iraq as "military contractors" a dangerous thrill not to be missed. The one young man, a 6'6", 270 lbs. teddy bear named Drew, talked big and carried a large tequila bottle. His more demure friend Will acted more the chaperon. We had several conversations about the "war" and the Blackwater role. They sympathized with the disparate differences between wages and rules for them as compared to us, the active duty military. The scrutiny they don't receive for what can only be described as war crimes as compared to the prosecutions of only low-level military for crimes they were complicitly ordered to commit.

I reiterate, I do not support the policies and posturing of the American military establishment in regard to the heinous acts committed by the persons prosecuted. I do not cotton to the "My Lai defense." Simply said, investigations and imprisonments need to happen at much higher levels, e.g., Rumsfeld,et al. (speaking of which, I just heard this...) and the rules of engagement and pay need to be commensurate. At bottom though, it is clear that Blackwater is now substituting as a private army at ten times the cost to avoid a draft, any participation, or impact being felt by the American public in this quagmire called "The Iraq War."

Drew, while talking extensively about "being in the shit," had many moments of doubt about the role he plays in "the sandbox" during our conversations. The day before we left Cozumel, he got so drunk, he stumbled around and hit his head poolside. My feeling was he was 'drinking his feelings.' Not to mention, it is quite a feat getting cut off at an all-inclusive, hotel bar in Mexico. He was carried up to his room by hotel security, and turned out be be no worse for wear the next day. And Dr. Turtle did check him out for serious injuries.

This actually started out as being a travelogue, but I found even being on vacation in paradise, an inability to quiet the nagging of my consciousness regarding the state of the world. We did see some extraordinary sights and the damage that remains of Hurricane Dean.

The largest loss seemed to be in the iguana population which suffered many deaths for which I mourn. The Mexican middle class seems to be growing but the significant observation for me was how similar our countries have become. While our middle class is shrinking and poverty is on the rise, corruption in government between the two countries is virtually indistinguishable, and the politics of greed are in full swing, bringing us closer together in national temperament and template. 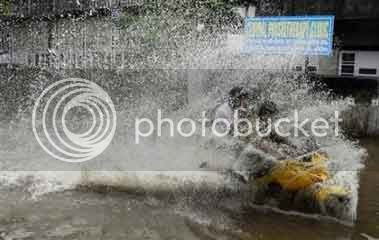 Clearly, I can't be trusted to go on vacation and just relax. I apologize to my dear husband. And also for the nasty squall we encountered while on scooters (my idea), in shorts and tees (mine too), 13 miles (!) from our hotel. And what is it with us and driving through rainstorms lately?
Posted by HopeSpringsATurtle at 9:27 AM

The last chapter on this country has already begun, and will probably finish before much time has lapsed. What that means for the Latinos that will be stranded in SEVERAL countries, rather than the one they actually emigrated to, remains to be seen. Personally, I wouldn't want to be a Latino in Dixie when the ball of wax melts.

Boy can you call them JR...

Yeah, we're fulfilling that Chinese curse, and living in interesting times; but they'll probably get more interesting yet before we're done.

Clearly, I can't be trusted to go on vacation and just relax.

Well, at least you tried. Welcome back.